After I wrote my last post on why working 9-5 is a bad idea, I found out Yahoo’s CEO Mayer was killing telecommuting. It’s a classic failure of leadership and will get her the opposite result than she hopes.

This last week, Marissa Mayer ended telecommuting for all Yahoo employees. The few retro voices in the archaic wilderness trumpeting this move as “good”, say it will make Yahoo more “innovative” and “collaborative”. Uh…cubes. They’re being stuffed back into cubes.

More Productive?…No.
This definitely won’t make them more productive. All the data old and new confirms this. Until after 1850, the majority of all manufacturing and other productivity was done at home. Salary.com research shows people waste an average of 25% of their day in the office doing nothing. Other research shows that people in an office waste up to 50% of their time “managing up” (brown nosing). Telecommuting is proven to increase productivity.

More Innovative and Collaborative?…No.
And there is no data that suggests that putting people back in cubes makes them more innovative or collaborative. Mayer’s decision was lazy and lacked any innovation on her own part. There are a hundred better ways to make sure telecommuters are touching base in an innovative and collaborative way with each other and the company, but that would have taken some energy to figure out. Reintroducing the brass steam whistle and the time clock was much easier, but is a short-sighted decision.

Yahoo Employees Are Now Stupid and Lazy
But the worst reason for doing this is that it reinforces the traditional understanding of the “employee”. In 1903, Frederick Winslow Taylor wrote his views of work that became the foundation for Scientific Management theory, which governs our view of work today. He said there are two basic assumptions you must make about employees, 1) they are lazy (he called it soldiering – doing as little as possible to keep from being fired), and 2) they are stupid “the average employee is so stupid that they more nearly resemble the ox than any other type.”

If employees are stupid and lazy (a view not common until well after the 1850s and convenient for Industrialists to believe as they treated them like indentured servants), than you need smart and motivated people to manage them – thus the modern separation between “employees” (stupid and lazy), and “management” (smart and motivated).

Mayer Is An Industrialist
Mayer’s move is a confirmation that she is a modern Industrialist (click to see my post defining this), and believes her people are definitely lazy, and almost certainly stupid (can’t figure out how to be productive on their own). But the problem isn’t with her employees; it’s with her leadership. Great leaders inspire and motivate people to be owners or “Stakeholders”; self-managed and proactive adults who take ownership of their jobs and the company’s future, and are consistently creative and innovative, always working to make the whole “system” better.

Mayer lacks leadership. She can’t inspire and motivate adults, so she has gone to the fetal position of Industrialism, requiring that all the stupid and lazy children now check themselves into the day care center that is the office so that managers can keep them from running into the street or messing on the carpets.

The Opposite Result
Yahoo needs engaged Stakeholders – adults who can work with her to pull Yahoo out of the morass. Instead she is creating employees – children who will be managed and told what to do. Innovative and collaborative, my eye.

A classic failure of leadership, made worse because her actions blame the Stakeholders for her own lack of vision. This is nothing more than calling all the elephants to the graveyard for Yahoo’s last rites.

BLOCK is a Participation Age Company

Employees will hate where the world is going.

Take the Test; Are you an Employee or a Stakeholder? 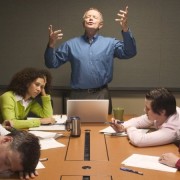 Why You Can Never Empower People, but You Absolutely Must Engage Them

Every Business Owner Should Have Freedom Days

The Seven Business Cultures – Which One Is Yours?

Participation Age Practices: DEG Invites Everyone to Start Something